Random corn stalks in the city

We're not certain whether neighbors (in a rather upscale co-op building) in Chicago's Gold Coast are looking for ways to cut back on their food bill; whether aliens or high winds planted corn seeds in random little spots of soil around town, or if the phenomenon we've noticed is a real slow-occurring Internet flash-crowd event by cornstalks.

Whatever it is, we've seen random stalks of corn sprouting in the oddest places across our city. This morning's discovery was of a single stalk of corn (don't city farmers know that stalks must be raised in twos so they can cross-pollinate?) accompanied by a tall baby-tomato plant on the alley-facing side of an otherwise perfectly landscaped property.


Could be some folks' response to rising food prices. Here is another, sprouting from the little stretch of soil on the margin of a Walgreens parking lot on Diversey Parkway at Halsted Street. 'Least somebody knew to plant these in twos:
Posted by Broke but Happy at Saturday, October 30, 2010 1 comment:

I Paid $1.00 for one cigarette tonight

Broke girl knows value when she sees it.

A neatly-dressed man mumbled something in my direction as I stepped up to the door of a 7-Eleven store tonight.

"What did you say?" figuring him for a beggar wanting cash.

He spoke louder, "Do you have a cigarette?"

"No, I don't," I said, and went into the store. While the clerk rang up my caffeine-free Diet Coke, I looked up at the prices posted over the cigarettes behind the counter. Something like $9.95 and such.

"Do you sell single cigarettes?" I asked the tall skinny kid behind the counter.

"Uh, nope," he replied, and kind of laughed at the notion.

"Well, there's that guy outside who wants one. Do you smoke?" I asked. He looked like a kid who did.

"Could I buy two cigarettes from you? I asked, and pushed a dollar across the counter toward him.

He smiled as he pulled a pack out from under the counter and handed a single cigarette to me. "No, no money," he insisted. "I get it."

"No no, really, keep it," the clerk insisted.

But I said, "Thanks, I appreciate it," and left the dollar on the counter. Walked out the door, turned toward the guy, still off to the side of the entrance and said, "Here's a cigarette."

As he took it he said, "Thanks. Here's fifty cents," and reached his other hand out to me.

"Oh no; no money," I said as I turned toward my car. He thanked me again and quickly disappeared down the street.

I don't know why that man needed a smoke. Maybe he'd lost his wallet. But I'm glad I extended a bit of kindness, even though making that personal connection involved nasty nicotine. I'm glad I did it, just as much as I hope he will find it in him to quit smoking right soon.
Posted by Broke but Happy at Wednesday, October 27, 2010 No comments:

In a sketchy stretch of northwest Indiana where Gary kind of grinds down and the road stretches into mile after mile of closed-down businesses, shuttered shrimp-shacks, and the occasional liquor store, there is a little spot where a bit of renewal appears. A few slightly upscale vacation getaway homes appear as the Indiana dunes near.

Anyway, I recently chose to take the roads less traveled to a destination in Michigan--and-- to drive free of charge (eschewing the dull views from Interstate Route 80 and tolls to the road's operators, the Spanish Cintra Concesiones de Infraestructuras de Transporte and Australian Macquarie Infrastructure Group). So while on this trek that probably used to be really busy (there were four empty lanes of roadway), I spotted an odd-looking "weather vane" that topped a spanking brand-new bank. Stuck out like a sore thumb along the eyesore of a route. Made an immediate U-turn in front of no on-coming nor off-going traffic to go back and take this photo: 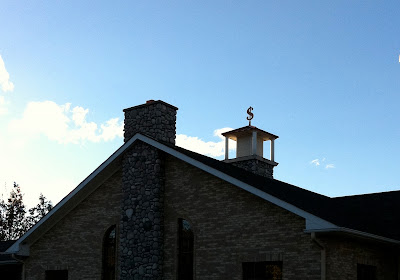 Then a closer look: 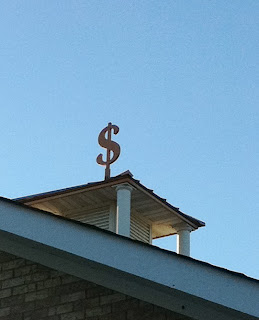 The Facade: Things are Not as They Seem

Like a gawker at a bad accident, I've been a little bit overly curious (er, fascinated?) about the evolving story of a "perfect" suburban Chicago family whose facade was horribly sheared off this week.

It started Wednesday, when the dad arrived at a hospital emergency room with his wife's body wrapped in bedsheets. According to a friend, he "is a quality individual who I have a lot of respect for." Their very attractive children "were gifted" and became stars in their respective athletic pursuits and careers. But with a bullet through the mother's head and the dad now in Kankakee County Jail charged with first degree murder, well, the beautiful tale is unraveling fast.

Things were not as they seemed.

The next thing that flashes through the collective reader conscious goes something like, Was it money and /or sex? An affair, and whose? Gambling, financial fraud; maybe a drug habit lurking behind the beautiful facade?

The Chicago Tribune quotes a bystander to their lives, "They were like the perfect couple. They had a very happy marriage."
~~~~~~~~~~~~~~~~~~~
So let's take it on home, dear readers: Often things are not as they seem, inside the house, behind closed doors, in the bedrooms and hearts of people everywhere.

And my point is (similar to my recent rant about the problem of Eve, of wanting that which is not yours), we think we want what others have. But we only see a glimpse, a smidgen, a tip of the iceberg that lies beneath.

I mean to say, if you think you want your neighbor's husband because he looks like all that, showers her with the stuff she thinks she wants, has a big bucks job, well:

You could be mightily shocked to see the real picture behind the facade. She may be driving a Lexus, rolling up her Prada sleeves to show her [insert famous jewelry designer name here] bling while running out to pick up new lingerie for their 5th wedding anniversary luxury cruise to wherever. But what you don't know: how long it has been since he's touched her, the prescription meds that keep her going, the double- or triple-mortgage he may be forging and hiding from her... You do not know.

So wipe that greed, envy and self-pity off your face. Until you know the real story behind the facade, do not ever think you want to swap your life out for someone else's. Unemployed, divorced, struggling with alcoholism, debt, illness? Life is difficult, indeed. But the art of being satisfied with what you have is--well, just not cool, or normal, or the way things are. But it might help you to be less distressed with the difficulty that is yours, by understanding that facades rarely, in my opinion, represent what really is.*

A few minutes ago, in the middle of writing this blog (because I can't stay focused more than two paragraphs in a row), I broke to read the New York Times Vows column. It featured the East Hampton wedding of a beautiful, talented and socially-upward couple. Of course I hope the very best for them, and a happy 50th wedding anniversary some day.

Yet I shook my head in a little bit of dismay at the reporter's supposition, "...for the wedding of this couple, whose love story contains no gray areas, the whiteness of [the wedding decor] conveyed confidence." [Emphasis mine.]

Yeah. Well, this couple has been together three years already. And gray areas are there, believe you me. No human love story is otherwise.

And back to my point: Yes... Be happy with what you got.

And now, this former investment banker is off to cash the checks she earned babysitting--yes--babysitting this week! No five-figure bonus check this month, but life is ever as good as it was with more money, and I would not trade my life...