Nicest Guy Ever - Next In Queue

Well, yesterday's Nicest Guy Ever award winner may have a competitor lurking in the wings.

I don't know how I got started in conversation with a dude on my block, but next thing you know, he said he'd get information from his girlfriend about a great spot where I could purchase a replacement for my bicycle that was recently stolen.

I say "dude," because he was one. He had more tats per arm than I have holes in my ears. And speaking of holes in ears, he'd had major lobe stretching done. And for a white guy, had some pretty awesome dreads worked out.

But he turned out to be my kind of friend. He couldn't recall the name of the bike place, so I pointed out which house was mine, and asked, "When you find out, maybe you could drop a note at my front door?"

So when I returned home after several hours at the Schoolyard Tavern last night where I'd met with a few twenty-something girls who wanted a meet-up for some Broke Girl living and budgeting advice, I spotted this note on my front porch: 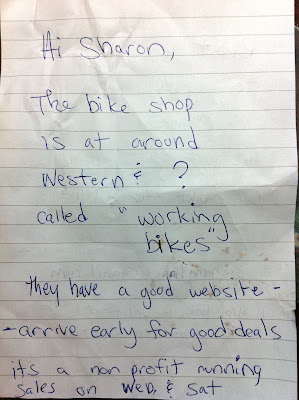 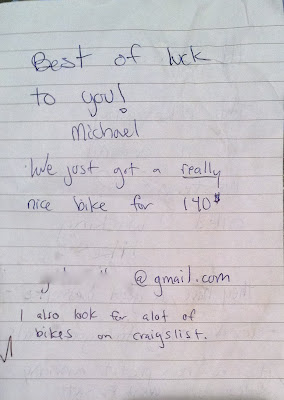 I've been searching for a bicycle replacement, and just haven't been satisfied yet with one that I'll be using for another 20 years. Might try this shop; I'm happy to have a second-hand bicycle.