Lessons from a Beautiful Poor Woman

Hers was a life, anything but rich.

On 7 November 2009, she died of dilated cardiomyopathy (an enlarged and damaged heart compounded by many other physical ailments). She collapsed at the nursing station in a psychiatric hospital where Chicago police had forced her admission several days earlier on grounds of "impaired judgment." Guess they couldn't find reason enough to put her in Cook County Jail, although she had spent, in her lifetime at least the better part of a year there.

The years in between, the girl had barely a dollar to her name although she did receive a monthly disability check after the father of two of her children bashed her in the head with a brick causing permanent brain damage. Born poor, lived poor, died poor and buried somewhere along the fenceline at Forest Home Cemetery, Forest Park, Illinois.

I honor Wanda today. She tried to teach me a lot; many of her repetitive lessons didn't get entirely through to me. I still think about them.

After I ID'd Wanda's body at the County Morgue and threw a memorial service for her at one of the shelters she frequented, I sent an email to a local columnist who then published this story about Wanda and me in the next day's Chicago Tribune. 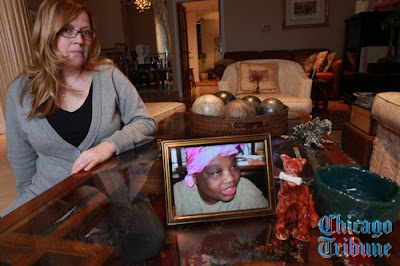