Broke Girl here. So pleased with herself, she should be embarrassed. Which is why she is (I am) talking about herself third person.

I instantly launched a compliment on the dress, but before it was even out of my mouth, I had an inkling of a recognition.

"Yes," she said. "This the the mini dress you bought for me at a thrift store about eight years ago."

It was 2002, the summer I was living half in a Michigan farmhouse, half in my various Chicago friends' vacant apartments, spare rooms, or built-out basements. "Jenna" and her husband came to me and asked, "Would you like to rent a two-bedroom apartment in our North Center three-flat for the next four months, ending 1 October?"

Well, sure; I would be interested. ...Since I'd been living peripatetically and the big old farmhouse was just a bit lonely for my liking. What is the rent?"

"No rent. Our house is for sale and you'd stay free. Just pay electric. Do you wanna come take a look at it?"

So began another wonderfully fun summer, living just downstairs from the darndest, funnest, couple--one of my most admired families.There's so much more I could say about that fun footloose summer, but I'll leave it there.

I got into this thing that summer where I only wore dresses (you know, the stage /fixation three-year old girls often get themselves into). Maybe because it was a hot summer and I bought just a small window air conditioner for my bedroom and certain dresses can be just the coolest most comfortable thing to wear. (A shout-out to Todd Lemmon and that supposedly Scottish skirt he wore to his own wedding.) Whatever it was, I projected my fashion choice on Jenna. Because when I happened by a designer consignment shop--McShane's Exchange--on Webster, I spotted this little shift that I thought would look so cute on her. So I bought it for her. As it turned out, it was a bit shorter than she preferred to wear. But she thanked me, and I think wore it out a time or two.

I can't believe she kept the little dress--vintage even in 2002. And I was so pleased with myself--or was I pleased with her--just for wearing it--eight years later!--and looking so great in it today. 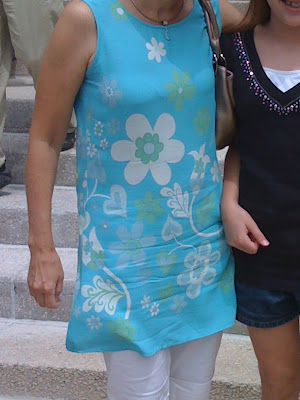