We're nearing Independence Day weekend, and I've been hanging around small Michigan towns for a few days. It's different here. Hillsdale County has had the second-worst unemployment rate in the State of Michigan, ratcheting up over 20 percent--and that in a state that already bumps around the bottom of the other 49 in terms of economic frailty.* 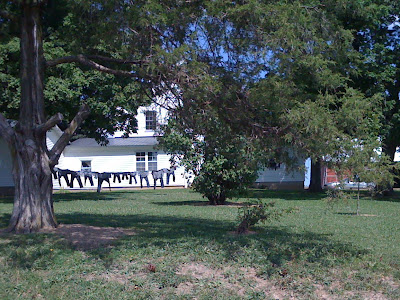 The Amish seem not to have noticed.

We stopped at a farmhouse pretending to want to buy food, but were actually positioning for a close-up of the Amish lifestyle. Spotted this hand-printed sign on the door: Noodles $2; Quart maple syrup $10; brown eggs... Their gardens looked full and prospering.

Is it a coincidence--this unemployment crisis in the same county where three months ago today, a few locals calling themselves the Hutaree were arrested in an international headlining FBI sting operation earlier this year, charged with plotting to overthrow the United States government via some homeland terrorism tactics... Anyway, next we came upon this ominous sign on a quiet country road: "Lost Nations Gun Vault," and, "Hrs Tue - Fri 9 - 5, Sat 8 - 12."


I wonder Why does a group self-titled "Lost Nations" advertise the location of their gun vault? Ah, and a closer look tells us: they take Visa and MasterCard! Well, 'least there will be an easy track-back of who purchased what and when after the Lost Nations people are Found. 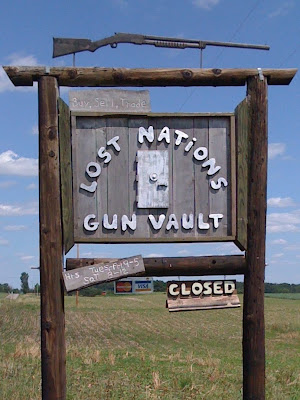 Meanwhile, we spotted a few historical markers. Chief  Baw Beese was the last of the Potawatami Tribe to inhabit the area before moving westward to Iowa. An historical marker at a bridge constructed in 1871 in Hudson, Michigan explains it is the location where pioneers cozily set up camp adjacent to the Wigwam of the Red-Man [sic] led by Chief Baw Beese in 1828. Then in 1871 came the arched stone* railroad bridge, paving fast transit for people, coal and ore from Buffalo, New York direct to Chicago.


Actually, we only noticed the unique all-sandstone arched bridge and its historical marker because it was right next to the parking lot of Bobbye's Pizza, where we specifically came for the Red Indian [sic] (hot cinnamon-flavored) ice cream.


Ran into a hometown mom we know. Her husband was, at that moment, packing up his brother's family for their own move westward. Unemployed for all too long and desperate to support his family of five, he is next week leaving the area that has been home forever, to their great-great-grandparents and before. Going west for the promise of employment as prison guard in Wyoming.

For more on the history of the gregarious and generous Chief Baw Beese who originally welcomed and aided the Euro-Americans:
"...It was a sad day when Baw Beese left. Schools were let out to bid the old chief and his people farewell. With Baw Beese driving a horse-drawn buggy in the lead, the Federals took the Indians from the camp at Squawfield, through Jonesville and Litchfield to Marshall [Michigan]. From Marshall they went west, then down the Mississippi, up the Missouri River and eventually to a reservation at Council Bluffs, Iowa where Baw Beese feared his mortal enemy, the Sioux."
Posted by Broke but Happy at Wednesday, June 30, 2010