Ladies who lunch are now bicycling off into early evening dinner. Got to love these women who are out on a hot June night, self-transporting on bicycles. So cool, so green, so Amsterdamish. This woman's friend is just behind her (see passenger rearview mirror.) Try not to observe that I took a pic while driving my car north on Lincoln Avenue, of this woman texting while bicycling. A whole lot of "don'ts" going on in this scenario. But cute, eh? 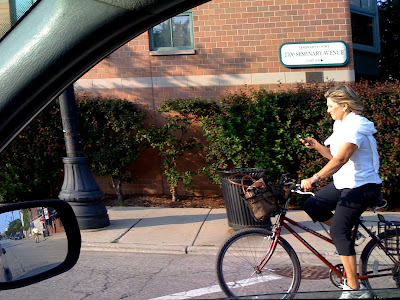 My current houseguests and I had earlier started the mile walk to our dinner destination, but forgot something and by the time we returned to my home to retrieve it, decided to hop in my car after all, missing out on much needed exercise; missing out on just a better, fuller and happier way to live. Our bad. I was heartened by the looks of these women. 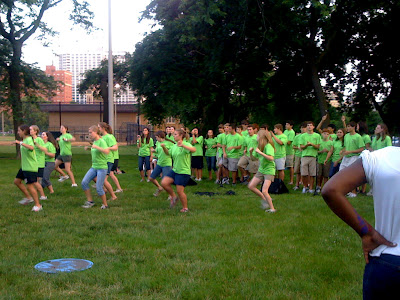 After dinner, we drove north on Sheridan to discover a group of teens bussed in for a week from a Baptist Church in Birmingham, Alabama to an Uptown mission. Fifty-plus blond, Caucasian teenagers descended upon the Uptown neighborhood for a week in what their lime-green Tees described as the "Somebody to love" Mission Tour 2010. Luke 10:27. We braked, parked and joined the two dozen bystanders enjoying their music and dance moves. Then the teens broke into a skit in which kids took posters bearing the words alcoholism, violence, guilt, drugs, and hung them on Jesus, a handsome young boy who accepted the signage around his neck. A thickly-accented Alabaman chaperone offered us a big slice of watermelon.


Moving along to Montrose Harbor for a scenic city view, we happened upon this happy fisherman who was snagging perch and giving them to the a couple a few yards east of him. He fished for fun, he said. Didn't know the couple (see woman in pink garden hat) to whom he was giving all the larger perch. Said he'd seen them there before and he always gave the larger fish to them, and tossed the smaller catch back.

Nice way to eat--free--if you don't think about whatever the perch might be swimming in and ingesting along this north Lincoln Park / Montrose Harbor City of Chicago shoreline. Another way to be happy or generous or eat cheap! This guy fished for the fun of it; the pink-hatted lady told me she was going to go home and fry it up for her family! 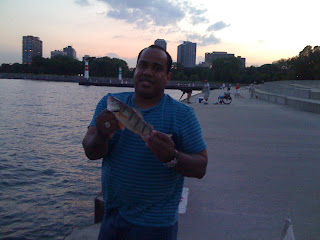