Who else goes to the cheapest grocer in the universe... and when there-- heads straightaway to the clearance counter at said grocer? I do.

I have house guests for a few weeks. These teen girls did not travel east of the Mississippi River expecting to be Broke Girls in Training, but that's what they were today. So we picked up some marked-down Hawaiian Punch freezer pops at ALDI's on Clybourn. Can't have enough icy old snacks during a fabulously hot summer Chicago season, we say.

The other thing about shopping at grocery store clearance racks is that you find out interesting stuff about the neighborhood demographic. Take this Jewel. With real estate at a shortage, it was built not on actual land, but is like "fake" new real estate, apparently with air rights -- this gleaming urban store built over train tracks in Chicago's Fulton River district.

Don't need an anthropologists' degree to learn about this neighborhood. Nobody here buying up beef jerky. Also, neighborhood women must be on that FDA-approved oral contraceptive that reduces periods to three to four times per year. Nobody's buying the hygiene products. I don't pretend to be a Freak-economist (some of their conclusions I find quite bogus), but anyway, must be a highly male-populated neighborhood, or the women are older, post-menopausal; or they're all pregnant. Whatever. I loaded up on some deeply discounted, but not near expiration, Ghiradelli dark chocolate, strawberry pancake syrup and cereal. You do know: grocers and pharmacies often slash prices on products they decide no longer to carry. So the items may not be at all aged or nearing expiration; prices dropped to below cost, just because grocers want to clear the shelves. And that's when I show up. 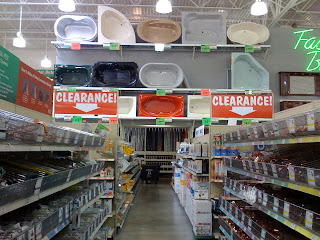 Likewise, when shopping for a new bathtub earlier this week, I of course, was distracted by the clearance counter at this location of the largest home-improvement store in the world! I checked it out because was in the market for a new showerhead, yet not highly particular about the styling. None there; worth the two-minute survey.
Lesson learned in this ALDI-Jewel-Menards pictorial: notice major orange signage posted well above eye level.
Posted by Broke but Happy at Thursday, June 24, 2010