It's been a busy day over here at House of Broke Girl. Started mildly enough with a bicycle ride to a tile outlet on California Ave at Diversey where I shopped for glass tile to install in my bathtub surround next week. Ended with an interaction with Chicago Police Tactical Officers Bermudas and Gillespie after I I.D.'d four young teens smoking weed whilst trespassing in a triangular spot between my neighbor's house and the alley. Only a big deal because that little tract is busier than a mall food court after school (do teens do that anymore?) and there is almost a waiting line in the alley. Time to stop it.

How many frugal acts can you spot in Today's "Broke Girl Daily Diary?" 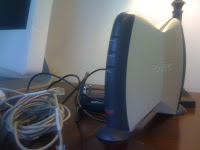 I doubled up by $aving gas, car wear and fitness center dues by cycling the six miles r/t to the discount tile outlet. Collected $15 at my front door when I sold an old 2Wire modem I no longer use to Avi via Craigslist. (I misheard on the phone, and called him "Javier" when he came to the door. "Nope, it's Avi; Not Mexican; I'm from Israel," he said.)

Collected $150 from a production company who used my kitchen for one hour to take still shots for an ad for a major pharmaceutical company. Then went off to collect data from a neighboring apartment, since I was the last person hired to enumerate for the U.S. Census, and had been assigned one case. (The apartment was vacant and for sale on Census Day, 1 April 2010--check.) Collected $18.25/hour for the period of time was doing that.

Highlight? As I cycled on Logan Boulevard past the Target store, I spotted a woman holding a sign, "Hungry + Broke" who had a stack of luggage and a dog with her. I couldn't brake quickly enough, so circled back to ask her gingerly--not wanting to be intrusive--whether I could take a picture of her sign. She had no problem with that, and said I could take a picture of her and her dog as well: Lena and Shaaka (I thought at first she said the dog's name was "shotgun" given my poor hearing).

Lena was friendly enough, and didn't mind my asking where she was traveling from and to. "I'm from Canada," she said, "and have been traveling for months. My boyfriend--he's just down the street there getting something to eat--and I are traveling together with plans to go to Oregon--Portland and Eugene." I didn't wish to intrude too much, but asked her if she'd ever been interviewed by a journalist. "No, I don't like all the questions. I'm rather shy, although someone once interviewed me for a school project." She never saw the story.

I didn't stay long, feeling a wee bit like I was intruding in her living room--which I was. After given Lena the entire contents of my wallet (nah, not that generous--I only had three one-dollar bills), I asked her, if she wouldn't mind, telling me her average day's take. "Money, you mean?" I'm not sure what else she thought I was asking.

I asked what was her biggest take, like, did anyone ever pull over and just hand her a couple of twenties or even a C-note, recalling I've given as much as $20 to a homeless person on the el at O'Hare Airport. She demurred.

BTW--as much as I bring it up, I almost never give money to homeless people. For example, I've never given coin to the guys who stand sentry at the door to the Post Office, nor those who intone at the entrance of a CVS or Walgreens, "Maybe on your way out?"

Lena and I talked a bit about hitchiking, and what sort of driver will pick up a a twosome with a dog. At which point, I said, "Were I ever to hitchhike, even though I'm afraid of guns, I'd be sure to pack one."