The film set that features you [WARNING: severe graphic]

I just read the following from an article by film producer Carolyn McCulley. Yes! just skipping about the Internets tonight I happened across this single, late-40s, "hottie" (as the kids are saying) and savvy writer, businesswoman, and film producer. I was so excited---someone with whom I fairly closely identified, knowing so few single, happy, healthy, girls-who-have-it-going-on, well-rounded businesswomen my age. McCulley writes:


"If you could make a film about Proverbs, it would make for a colorful film set. Boisterous, brazen harlots would roam the streets, looking for foolish young men. Sluggards would doze at tables, their hands still buried in a dish, or roll over on their beds, like doors on their hinges. Husbands would be living on the roofs of their homes while their contentious wives shout at them from below. Pigs would be running about with gold rings in their noses."

Awesome sight, would that not be? Makes me chuckle and want to produce my own film, showing the reality of life as it really is, not as we see it from our surface view.

Like, not to pick on Tiger Woods, but hey--he's such an easy target. A film portraying the real, inner appearance of Tiger Woods simply wouldn't have a handsome man with that gleaming, toothy smile and cappuccino-colored skin, smooth and taut over trim muscles. And that TAG Heuer at his wrist.

A "Proverbial" film showing the real Tiger would definitely have a contentious and shouting wife, and apparently multitudes of scantily, if not unclad women clamoring for a piece of the man. (Hey--I'm just calling like I see it, folks.) He would appear cowardly, a weakling, unable to care his family's emotional and mental health. So he'd look destitute and wretched, probably with a dumb, grinning expression. He'd be leaning against the Cadillac SUV, a rusted, limping tire-less wreck propped on cement blocks.

Proverbs is much about wisdom, and often defines wisdom by describing its opposite. You know how pointing out what something is not often helps us better grasp what it is?

Look in the mirror. Frankly, I'm liking less what I see as I age. But with more attention to makeup and the fabrics and cut that work for me, I can still get a good look going. But that's just v.e.r.r.r.y. on the surface. What do I look like with that stripped away? 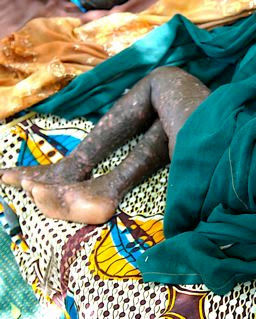 Am I a gnarled hunchback with smelly, hairy armpits, a screaming angry woman who foolishly drapes pearls on the necks of pigs? My nephew Jonathan Durling took this photo of a young girl in Senegal, July 2007. I'm editing out her pretty face for her privacy. But think: If you saw a picture as your legs really are, would they look anything like this horrible condition? The places your legs take you, the things you do, the motives you have, the desires you feed, the disciplines you push aside?

I'll leave you with the visual of a smart, savvy, lovely woman. For today, I will focus on the financial /business aspects of her inner being.

After solid market research, this woman decides to buy real estate with money she has earned and set aside. She keeps track of her cash flow and spending and makes sure it's in good shape. (Prov. 31:16a, 18a)

Know what she looks like?? And I do mean, the looks representing who she truly is, not her actual physicality:  She is one hot mama who turns heads everywhere she goes. Dressed impeccably, she carries herself elegantly but not in an off-putting way, and again--this is her inner appearance, mind you--she has the most luscious hair, face, fingers, figure and smile of all of those featured in People magazine's Most Beautiful 2010 issue combined!
Posted by Broke but Happy at Friday, May 14, 2010