"Homeless In My Heart"

Great story not to be missed: A father of three who once had a wife and a job lived nearly 13 years in garages, backyards and under bridges around New York City. His story was published in the New York Times under his byline, Cadillac Man. The title: "I Loved It Under the Viaduct; Still Do."

Although he now lives in a 12' x 14' room with his girlfriend Carol, she worries that he is still homeless in his heart. He wrote of his homeless era, "Every morning, I’d get up and say to myself: Where to today?" There is some profound freedom.

And speaks nostalgically of that era: "In the street, I had freedom, coming and going as I pleased. The streets are hard but they’re my life’s blood. I even write better there, with more energy in my stories."

He seems to know rich. Although they share a bathroom with two other tenants of the single-room unit building, you'll hear no complaints from him. He cannot believe his good luck in that he can take a shower "for hours if I wanted." 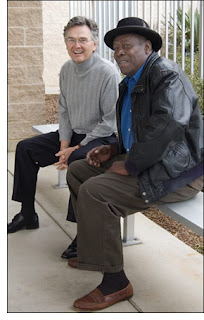 man who lived on the streets for some 40 years; but for him, it was a step up from his life as a modern-day slave. I have had the utmost privilege of meeting Denver Moore and spending a few days with him here in Chicago. He, a former slave (now 72-year-old Fort Worth, Texas resident) never spent a day in school and worked for the early part of his life at no pay for The Man.

The book he and Ron Hall wrote of the intersect of their lives has perched on The New York Times bestseller list for paperback nonfiction for many months. The story of the intersect of their lives is being produced as a major motion picture. I invited them to Chicago twice; the first time they spoke at my favorite homeless shelter, Joshua Center / Breakthrough Urban Ministries. The second, they spoke at Willow Creek Church in Barrington. Watch this video for a snippet of their story, which has since changed the lives of many people, wealthy and homeless, around the world. They are working on another book to tell of the amazing fallout /repercussions impacting people lives around the globe following the release of their first book.

Purchase the book, Same Kind of Different as Me or visit their website.

I have the entire book in PDF format (by permission from the publisher) and would be happy to email to you for your reading pleasure. Just ask.
Posted by Broke but Happy at Monday, April 06, 2009