Back When Problems Were Not

What a beautiful thing a problem is.

I just clicked on my favorite bookmarks tab to take me to The New York Times and was thrilled to see the home page feature story (as of 8:00 pm) about yet another pressing civic issue.

It was like back in the day! Back when you did not open the newspaper to discover 20,000 layoffs here; 5,000 early retirements there, and fifty-two shuttered Starbucks over yonder.

God bless the reporter Sam Roberts who uncovered this pressing story and strong-armed an editor to feature it:

"How Long to Fix a New York Streetlight? A Year, if You’re Persistent"

It is reassuring to see the little problems getting ink.

Meanwhile, I should be extra grateful that when I recently called 311, the graffiti-control team responded, quickly (nearly fast as a NY minute), painting over the tag on the light post in front of my house.

And when someone tossed a lit cigarette into my city-issued garbage can, burning it down to a little black puddle, a remnant of which is still affixed to the cement behind my garage, my alderman got me a new one within days! [A shout-out to Vi Daley!]

Yea for the City of Big Shoulders, the City that Works. Maybe I shall call a reporter to feature my tale in The Chicago Tribune.

So—what's a little problem that almost makes you glad? 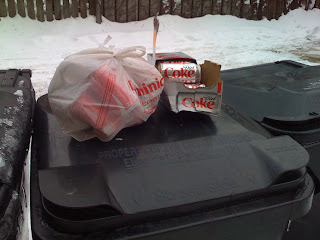 My beautiful new (rat-resistant design) garbage can. I leave soda cans on the lid for the homeless guys who collect them for cash. I hate to have them dig through garbage; it makes their workday a little bit easier.

See neighborhood worker I spotted last week, cans in blue bag on left. No, that's not his van. Under that big pile of stuff is his mode of transport, a grocery cart. 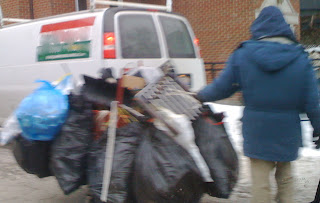