After attending an Association for Women Journalists event at ABC 7 Chicago studios tonight, I walked back to my car which was parked on Wabash Street in the Loop. It was about 9:00 p.m. The temperature was 15 degrees Fahrenheit.

I passed these two folks who had settled in for the night on the sidewalk just outside Macy's. 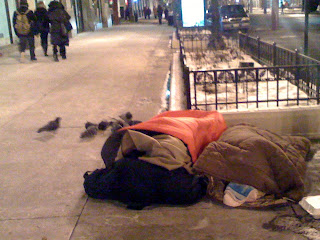 No, I did not stop to give them money. But last night I rolled down my window to give coin to the person toting a cardboard sign near the southbound Fullerton exit ramp off the Kennedy expressway.