I used to sniff at bare-bone ALDI stores in low-rent districts, which I ignorantly presumed sold little more than pork 'n beans and white bread.

That was before I read The New York Times article about the private company's business model and its "[sudden emergence] as a major force." 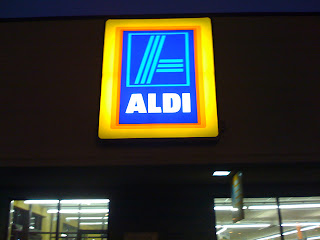 An Aldi snob I am no more.

I became a believer and now I drink the Kool-Aid.

Plus, the owners are just out-and-out intriguing: "...octogenarian German billionaires Theo and Karl Albrecht reportedly live on the island of Föhr in the North Sea, where they are said to collect typewriters, play golf and tend to orchids. In 1971, Theo was kidnapped for 17 days, and the brothers have kept a low profile ever since."*