I am guilty of wasting food, perishable and nonperishable.

Last year I tossed a bottle of salad dressing dating from the 1990s. And a half-dozen from the early oughts. I discovered several canned item that had been processed late in the Reagan administration. It is true, it is pathetic, embarrassing, criminal, sinful, all of those. But I keep doing it. Not hoarding, just buying food and not using it. (One reason this is, that I semi-hide in the shadow of my pseudonym Broke Girl.)

Proof of my healthy gastrointestinal system: A guest recently asked for meds for indigestion. I went right to the kitchen cupboard where I keep that stuff. And found a roll of Dairy Ease. The expiry date, October 1992, prevented my friend from taking it. I have carted this item from the Roscoe Village loft where I lived until 1993 to a Lincoln Park house, to Pasadena, to Chicago, a Michigan farmhouse, and for one year, a peripatetic squatter of various locales, then a Gold Coast apartment, and back to my house. 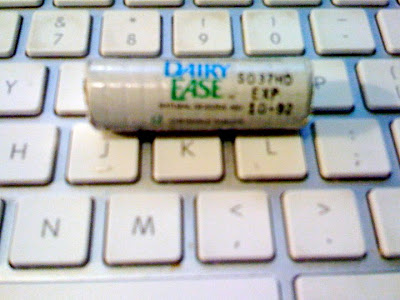 I decided to make brownies last night; found three egg cartons in the fridge. But I only needed one egg. My houseguests for the month of December had left a carton, a friend who stayed recently while I was out of town left some, plus I had bought some. Of all the cartons, there was not one egg that, when cracked open, didn't look so thick that a little chickie might just pop out. I discarded them all. So I looked further and tossed 2 lbs of frozen tilapia that expired 16 months ago ago. Cooking for one makes it difficult to manage volumes of fruits and vegetables, which are often cheaper by the dozen.

So I've implemented a new discipline in my household.

I date every food item that enters the kitchen. Before unpacking groceries I reach for a Sharpie. I write the current date on every single can, glass, box, carton, and plastic bag. I will also mark the date I open a carton of soymilk or juice. This is a big struggle.

I've a habit of keeping food items around that I won't eat because I think it might be a tad old; just a bit less than fresh, yet I am reluctant to toss. So I keep it around until it is for sure too old and okay to discard--like when it starts to look a bit petri-dish colorful.

Broke Girl's bragging rights to her awesome and savvy money management skills are at risk. Really, I've got it so together in so many areas that count. But not in the refrigerator and pantry.  And that is real money, left for the garbage pick up, like wadding up a C-note. It is just wrong.

Can this girl be saved by her Sharpie®?
Posted by Broke but Happy at Thursday, May 06, 2010