There is a lone twenty-dollar bill that could devastate the life of my friend Denise. WMDs—nothing!

For three years, Denise tended to her elderly aunt as the sole caretaker. Because Aunt Sylvia's only child had died and she disliked the surviving daughter-in-law, Sylvia called Denise, who willingly stepped up. 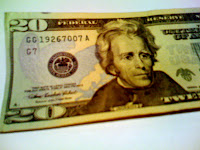 Then Sylvia passed away. Last week, Denise learned the will explicitly stated she was to receive $20 from an estate of several million. (Even Andrew Jackson looks dour.)

Denise and her husband don't have a lot of money. She would have appreciated some bequeathment, but didn't expect it. That's not what tore her apart.

A year before she died, Sylvia accused Denise of lying. But she had not. Perhaps the grief over her son and her advancing age provoked the 90-something woman to disbelieve Denise and cut her off.

The twenty dollars went a long way in buying Aunt Sylvia the devastating effect she sought. It was a slapdown with the potential to take out Denise, who cried for three days before calling me.

Sylvia died an angry woman, and Denise can do nothing to change that. But the thing is—Aunt Sylvia need not have the last word.

Denise was all set to return the money to the estate attorney with an angry letter. She had zero interest in suing for a share.

So I said, "Keep the twenty bucks. Sign off all claim to the estate and get on with your life. Then the other heirs (who are also estranged from Denise) will know that you know that they know that you have been disinherited; so fine! You, however, can fend off that fiscal WMD. You cannot allow that now-dead woman and her scheming heirs to destroy your life, your happiness, your self-esteem and your marriage."

Denise is thinking about it. That it's easy for me to say is an enormous understatement, but her choice is clear: she can fuel that anger into a crazy wildfire, or allow the anger to flame out. Let it go and move on.

And my point is? A lousy twenty dollars can wield the horror of your own personal 9/11, the torture of a waterboarding, and the last straw to crack your mental stamina. You cannot allow it. The good news: you, and only you do have the power to defuse a Weapon of Mass Destruction that may be advancing your way.

Frederick Buechner penned an apt description with a different metaphor:

"Of the seven deadly sins, anger is possibly the most fun. To lick your wounds, to smack your lips over grievances long past, to roll over your tongue the prospect of bitter confrontations still to come, to savor to the last toothsome morsel both the pain you are given and the pain you are giving back—in many ways it is a feast fit for a king. The chief drawback is that what you are wolfing down is yourself. The skeleton at the feast is you."*