Gifts From King and Lincoln at Their Birthdays

I love to visit memorials. In a "Saving Private Ryan" sort of scenario, three sons in the family of one of my ancestors died as Soldiers of the Union. Alone one afternoon at the Lincoln Memorial, I choked up as I read:

"…we here highly resolve that these dead shall not have died in vain—that this nation, under God, shall have a new birth of freedom—and that government of the people, by the people, for the people, shall not perish from the earth."

A few years later in San Francisco's Yerba Buena Gardens, I came upon a memorial for Rev. Dr. King that took my breath away. My chest swelled with emotion as I walked underneath its roaring waterfall and through teary eyes, read these words carved in the Sierra granite: 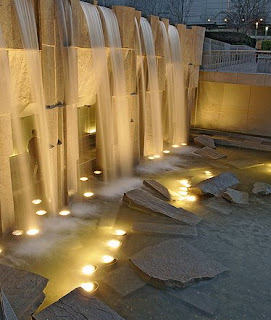 "I would rather die in abject poverty than live in inordinate riches with the lack of self-respect. We must rapidly begin to shift from a thing-oriented society to a person-oriented society. When machines and computers, profit motives and property rights are considered more important than people, the giant triplets of racism, materialism, and militarism are incapable of being conquered.”

What I'm getting is that when profits become more important than people, we can't make it. We are now in economic crisis. Can our trillion dollar problems be solved? Who knows? Take it to your microcosmic level. So do what you can do, not what you can't. The Nobel Peace Prize recipient warned we must be other-oriented. I'd bet that includes family, neighbors and strangers we don't even like. As for my micro economy, I can't reverse my 401k losses, but I bought lunch for my homeless friend Abner Daniels yesterday.

What else I'm getting is that self-respect is better than inordinate riches. This is fantastic news, my dear Broke Readers! Abject poverty—more bearable than self-disrespect (self-hate)?

Lincoln couldn't know his Gettysburg words augured his own memory, "...from these honored dead we take increased devotion to that cause for which they gave the last full measure of devotion..."

Both leaders assassinated, but their courage and the truth they each maintained are alive in the perspectives they give us, perspectives that are still saving lives, right now.
Posted by Broke but Happy at Friday, January 16, 2009