I don't have television, but not because I'm cooler than you. I was becoming a cable news show addict. I realized I would not watch it if I could not watch it, so pulled the cable years ago.

But then I discovered online TV where I sometimes watch a bit of Leno. The shows appear a day after the original air date, but that's no different from my rural childhood where the newspaper was delivered a day late because we were too far for same-day delivery. "Oh, so Nixon is no longer president as of two days ago?" (We didn't have a TV either.) 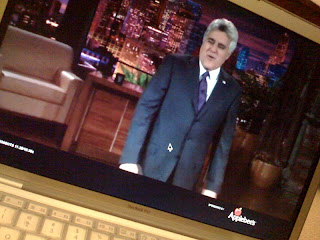 I'll watch 30 Rock, Desperate Housewives or The Bachelor. The latter, I swear—solely to track the devolution of civilization and the incredibly faulty thinking of what constitutes love, not unlike a gawker at an auto accident. Television hasn't improved in my absence.

My fave thing about Internet TV? Like TiVo, I can stop mid-show to take a phone call and finish it later. Unlike TiVo: free.